What Are Google's "People Also Ask" Boxes and How to Use Them for SEO?

Amongst some of the newly trending techniques that have recently emerged in the domain of SEO strategies PAA boxes have become essentially integral in the recent times. 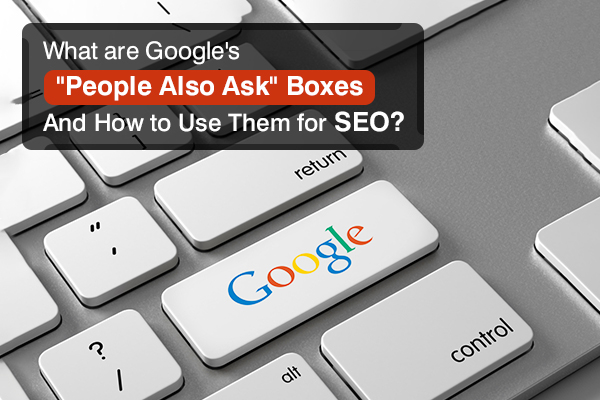 Research has pointed out that the prevalence of these boxes has increased to a great extent where nearly 43% of such queries exhibit PAA boxes. For the unversed, we must begin this discussion with an explanation of what is a People Also Ask box.

The "People Also Ask" or the PAA box is a highly effective and much applied SERP feature of Google. It is used to answer queries about the topic regarding which the user has generated a search or query. Every answer is supported with a relevant web page and the user gets a URL from Google which can be clicked so that you can be directed to the page which will offer you relevant information about the topic.

These boxes can have varied positions of SERP and the questions will look quite infinite. Again the format of the answer exhibited in these boxes will also vary from case to case. Similar questions might lead to similar answers in PAA boxes. So, one thing which is clear so far from this discussion is that a PAA box is not to be confused with featured snippets. Both of them are different features and definite differences in them. An SEO company helps many businesses to rank them in the “People Also Ask” box of a SERP.

How effective are they

The application of PAA boxes is a very recent trend. The data available regarding the way people interact or use information exhibited in PAA boxes is not only very little but is also rather diversified. Some researches indicate that about 3% of internet users actually use the information which is given in the PAA box. However, this number is definitely not fixed and varies from topic to topic about which queries are generated in different search engines.

People use information in these boxes in different ways. Some of them expand the mere answer which is given in the box and in some cases people click on the website links which are provided in a PAA box. A PAA box can often have 3 to 4 answers which give the searcher a greater array of choices both in terms of information related to his query and also the number of web pages that can support his requirement.

Just like in search result pages, ranking in PAA boxes is also an imperative goal of SEO companies. The process taken up to finally attain this goal is to look for a relevant question that can be exhibited in the PAA box. Next, you must make on-page Optimization that enhances Google's improvement of your page. Just working on the nature of the question might not be enough to get a proper PAA box ranking.

Instead, you must concentrate on the keywords which are being used combined in this question. This could be an effective way through which your content could become the answer to several similar and related queries. This will also help to attract greater traffic to your website.