Today, businesses of all kinds and sizes are attempting to set foot in the digital industry. Everyone wants to go global, after all. However, becoming part of the current phase of digitization requires you to choose the right tech stacks. 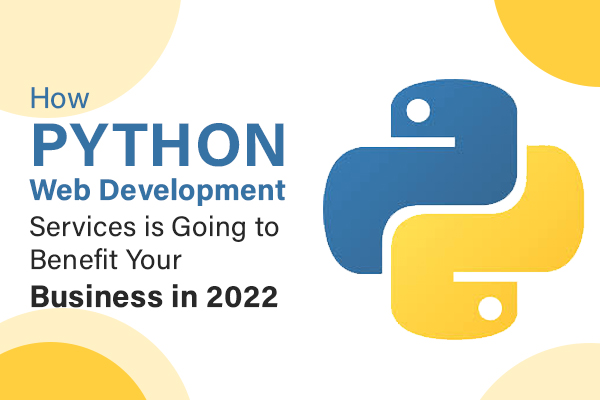 Just take programming languages, for example. You need something scalable, flexible, and cost-efficient. Businesses also have to think about the cost of development, security, user-friendliness, etc. Is there a programming language that meets all these demands? Yes, there is, and it’s called Python.

Python has been holding the “numero uno” spot from the first day. However, over the last few years, the demand for Python has been reaching new heights. In 2021, Python’s demand went up by 27%. You’ll realize why it happened when you consider this – brands like Quora, YouTube, and Instagram use it. Whether it’s an MNC or a startup, everyone wants to leverage python web development. Here are a few reasons behind the prominence of this programming language.

Reasons to try Python this year

A business has to be versatile to be successful right now. When it comes to programming languages, versatility is the trademark of Python. If you’re wondering about the benefits of python web development, you’ll find them below.

1. Faster development of projects: Python has several built-in dictionary data structures contributing to faster runtime of the written code. Also, the length of the code written in this programming language is much shorter than others. Python even has powerful process control and text processing abilities apart from an efficient framework for unit testing. These features contribute to higher productivity and speed. In turn, they help Python developers finish projects faster.

2. Perfect web development platform: Python earned recognition as the most preferred language in the dominion of web development. The language provides developers with numerous features – all of which are valuable and unique.

3. Portable code development: One more reason Python is perfect for business project development is that it’s portable. Every piece of code written in this programming language is fully portable. Developers can use it in every operating system available under the sun. These include Linux, UNIX, Windows, and Mac. This feature is crucial to businesses as you can switch to various platforms whenever needed without regenerating the code. It can also save time for your organization.

5. Data safety and security: For businesses, data and keeping it secure are two of the most crucial objectives. Customer data is of inestimable value to organizations. According to researchers, almost 64% of all businesses had to experience online attacks. The safety factor of Python comes from the fact that it keeps the source code of the program hidden. No one can view it directly. As a result, hackers experience a hard time breaching the data. Rest assured, an application designed using Python will remain safe from cybercriminals.

6. Availability of several frameworks: Python gives developers access to a massive array of frameworks. Fundamentally, it has two.

There are differences separating the two, but, unfortunately, it’s a subject that goes beyond the scope of this topic. The frameworks used in Python make the process of development easier. They allow the developer to work more efficiently and creatively.

7. IoT: Undoubtedly, the future of technology is in the hands of IoT or the Internet of Things. IoT is spreading as quickly as the coronavirus did across the whole world because of its advantages. Python-based platforms, such as Raspberry Pi allow developers to create exclusive digital devices with ease.

8. Reducing expenses: Generally, budget constraints don’t affect large enterprises. However, every penny counts for small and medium-sized businesses. As Python leverages efficient coding techniques, it reduces the time required to build the code. In turn, it brings down the time to market. The expenses associated with digital product development for businesses depend on the working hours spent by programmers. Fortunately, the providers of python development services offer their services at reasonable prices.

It has been thirty years since the inception of Python. However, it isn’t showing signs of getting old. It dominates the sphere of web development with unequaled prominence because of its libraries, modules, frameworks, etc. So, if you’re in search of a programming language that’ll help you achieve your business goals, Python should be your choice.